***REVIEW*** One Foot in Heaven: My Last Gift to You by Kelsie Wakenshaw 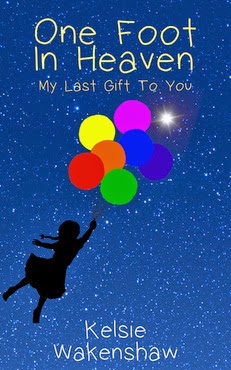 “Paige was the most kind and caring person I will ever meet, she spent most of her time loving and caring for her many animals. I think from the moment Paige was born, she always had one foot in heaven”. Kelsie.
Paige Fenwick Wakenshaw was just like any other sixteen year old, until one fatal evening out with friends. The details of that night still remain unanswered for her heartbroken family. All that we know as fact is that Paige was left severely brain damaged after a terrible accident.
Her younger sister Kelsie was only thirteen when Paige fell from a flyover onto a busy stretch of the A1. Kelsie began writing these memoirs, which she describes as her real life story, two years later at the age of fifteen. Still a young teen herself, when her precious sister passed away.
She describes the effect it had on her and how her relationship with her family went from strength to strength as they fought to stay strong and dared to hope for a happy outcome.
Kelsie takes us on an emotional journey through the eyes and heart of a naive teen. We witness, through each chapter, Kelsie maturing into a caring young adult way before her time.
She describes with such innocence and honesty, the people and places that inspired her, and the people and places that left her disheartened in a PC system that seemed to work against her and her family rather than support them.
Being a teenager is tough enough without losing the one person who you could always turn to. Kelsie went overnight from being the protected little sister, to helping to take care of her best friend and older sister, Paige.
In these memoirs Kelsie introduces us to Paige, the Paige before the accident, before she became famous locally for all the wrong reasons. The Paige, Kelsie describes fondly as the biggest influence in her life.
This is a real life story of a sister’s love, and the real life struggles of a teen girl who bares her thoughts and emotions with the world as she struggles to put some balance back into her life.
Writing these memoirs has helped Kelsie move on in her life. Kelsie was restricted by those in authority in the amount of care she could give her sister. She was in their eyes, too young.
Kelsie opens her heart to the effect these restrictions had on her, how she allowed it to slowly eat away at her. So much so that she refused counselling in fear of been labelled as the ‘kid that couldn’t cope’.
It took Kelsie three years to write this biography and states this was her way of coming to terms with her bereavement. She is now ready to salvage what she can from this life changing experience, and grow from the many life lessons she has learned because of it.
Kelsie is eternally grateful to have been blessed with such a wonderful sister, the precious time that they spent together was too short and serves as a reminder to us all of the importance of cherishing those that we love.

I read about this book in our local newspaper a few days ago, and knew I had to buy it as soon as it was released, So I did. I remember this all happening. I didn't know Paige or Kelsie, but I did know their brother Ian, and know of her brother Kyle. I remember hearing of Paige's accident, and hearing about her passing a few years later.

This book was lovely, and absolutely heart breaking. Reading it, you can most certainly feel the love everyone had for Paige, and the devastation the accident caused not only for Paige, but her family and friends too. But mostly you get to see just how much Paige meant to Kelsie, and how Kelise was tog row up pretty quickly to take care of her sister.

You see the trouble the family went through with court cases and social services, which to me is heart breaking. I mean, in my opinion, no one should ever come between the care of parents and their child. I really felt for the family reading those bits when they were told they weren't allowed to wash Paige and clean her up, even though the hospital care wasn't proving adequate.

The funeral is described in the book and I have to say I shed a tear or 2 reading about how all of Paige's family and friends turned up in bright colours, and all released balloons after the service, that would have been a beautiful sight.

This was a really heartfelt book from one sister to another, full of happiness and sadness, and I would recommend anyone read this.

Email ThisBlogThis!Share to TwitterShare to FacebookShare to Pinterest
Labels: Kelsie Wakenshaw, One Foot in Heaven: My Last gift to You, Paige Wakenshaw