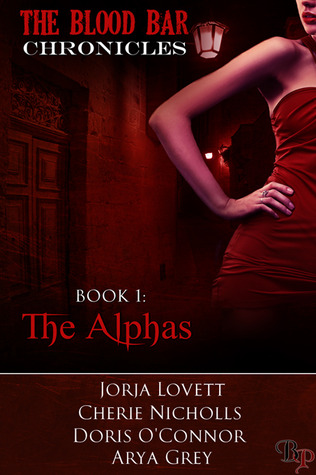 This book is an anthology of 4 stories from 4 different authors:(the blurb from Goodreads)

'In Her Element'
By Jorja Lovett

'The Alpha’s Vixen'
By Cherie Nicholls

Dora "Dizzy" Williamson is a busy lady, but she finally made time to meet some of her writing group in a new bar. Surely a couple of hours with the ladies wouldn't be too bad, right?
Xander Di Rista is CEO and Alpha to his pack, so being drawn to a new bar that prickled his fur didn't sit too well with him. Tonight felt different, there were too many Supernatural’s in one place, but only one human stood out to him. One he intends to claim and protect because hell wasn’t just breaking loose, it was coming to town.

Noelle has only one thing on her mind — how to save her sick daughter from a mysterious illness. The night out with the girls ought to be a distraction, but it turns out to change her life forever.
Fate is not something Henri, a two thousand year old vampire, takes lightly. When he steps into the bar teeming with Supernaturals, there is only one scent he finds. Noelle was the one woman he’d never forgotten. She held a secret that could cause a war. With time finally ticking in his ear, there is only one decision he can make — he has to protect her or die trying.

Josie McNair may be all fire on the outside, but her lack of self confidence had her insides twisted over meeting her writing group. She begins to realize there are more creatures in the world than she first suspected and finds herself thrown into a life where time has no meaning.
Time Traveling peace-keeper David Malm could never believe in love again. When a future Henri instructed him to look in at the Blood Bar on this particular night, he didn’t envision it turning into a Supernatural disaster let alone be in the throws of passion with a beautiful stranger. Josie re-ignited something in him he'd thought he lost forever and he would do anything to keep her safe.

I loved the way all 4 stories linked into each other, but I think it got a little confusing with who was who etc. The whole supernatural part was what I wasn't too keen on really. I like supernatural stuff, I do, but this just didn't capture my attention.

I have also bought book 2, I will give it a go. Hopefully I might enjoy that one more than the first.
Posted by Unknown at 09:59