A Stolen Life by Jaycee Dugard 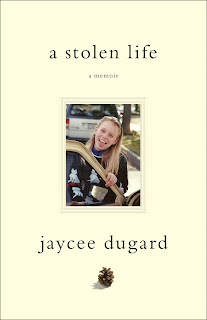 A Stolen Life by Jaycee Dugard

I haven't read a book like this in a long time, pretty much since having my children as it makes me so much madder than it used to. I guess that's the being a parent part.

Anyway, I read this over the last few days, and it has had my heart wrenched.

On 10 June 1991, eleven-year-old Jaycee Dugard was abducted from a school bus stop within sight of her home in Tahoe, California. It was the last her family and friends saw of her for over eighteen years. On 26 August 2009, Dugard, her daughters, and Phillip Craig Garrido appeared in the office of her kidnapper's parole officer in California. Their unusual behaviour sparked an investigation that led to the positive identification of Jaycee Lee Dugard, living in a tent behind Garrido's home. During her time in captivity, at the age of fourteen and seventeen, she gave birth to two daughters, both fathered by Garrido. Dugard's memoir covers the period from the time of her abduction in 1991 up until the present. In her stark, compelling narrative, Jaycee opens up about what she experienced, including how she feels now and the struggle to re-build her life after eighteen years in captivity. Garrido and his wife Nancy have since pleaded guilty to their crimes.

This book was so horrific, that I had to stop a couple of times and remind myself that this is real, this actually happened, it's not a work of fiction. And then each time I really remembered that this was real, I cried. I cried a lot during this book. The awful, disgusting things Jaycee had to go through, at just 11 years old, and giving birth at ?!!! I'm just so glad she was found and is now living a good life with her daughters, and has been reunited with her mother.

The book is kind of in 2 parts, at the end of each chapter Jaycee has written a reflection. I enjoyed reading these parts as it shows Jaycee has overcome some of the awful things she endured.

The last half of the book descibes Jaycee becoming free, and returning home. It sounds like Horses have played a good part in her recovery, and I'm so happy that now she is free.

An awfully sad and horrifying book of every mothers worst nightmare, and every child's terrifying hell. But Jaycee has grown into a wonderful lady and has 2 great daughters and a brilliant family who support her in every way.