The Further Adventures of an Idiot Abroad by Karl Pilkington

The Further Adventures of an Idiot Abroad by Karl Pilkington 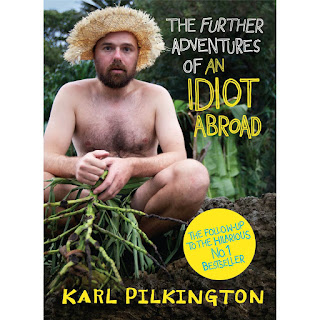 I finished this this morning, and I've loved every minute of reading it!

The first one was great too. I read both after watching the TV series, which I really enjoyed.

In this one, Karl takes on some of the things from the top 100 things to do before you die Bucket list. This includes Spending a night on his own Desert Island, Traveling the Trans-Siberian Railway, Going Wing Walking, Seeing the Gorillas in their natural habitat, Traveling Route 66, and much more! There are lots of surprises along the way too, thanks to Ricky Gervais and Stephen Merchant, who lets face it, were never going to make Karl's life easy were they?! The stuff he see's and does is awesome, things some people will never get to experience. But he still whinges and moans about it doesn't he! But that's Karl, it wouldn't have been the same having some happy-go-lucky, smiley cheerful fella doing all of this!

But it's Karl that makes it isn't it. Some of the stuff he says is just ridiculous! I bookmarked some pages to add quotes on my review. Here are a couple which made me laugh:

The Problem I had with driving Route 66 was the way I was continually thinking about getting to the end of it, instead of just enjoying being on it. I was treating it like I was running the London Marathon. I said at the time, it's the same approach I have to eating an orange - I'm so busy trying not to splurt it down my t-shirt or to stop the juice running down my arm, I'm not giving any thought as to whether I'm actually enjoying eating the bloody thing. The only time I can really enjoy an orange is when I'm in the bath, but I don't get to do that very often because the boiler overheats if I try to run a bath, and eating an orange in the shower isn't easy either.

Stephen: Would it interest you to spend time with Eskimos, or Inuits as they like to be called?
Ricky: Yeah don't say Eskimos. That's a derogatory term now, say Inuit.
Karl: Who's come up with that little problem for them? I've never heard an Eskimo moan about that. They've got bigger worries than that. They've got mouldy old bananas and no proper food. It's someone else, in London that, sitting in an office saying 'Oh they don't like that'. They're not bothered! I bet if I called one an Eskimo they wouldn't get upset about it.
Ricky: (laughs)
Karl: People make up little rules. You can't call a midget a midget, they prefer Dwarf, and Leprechauns....
Ricky: Leprechauns don't exist. Leprechauns do not exist.
Karl: Well if they did, they would go 'don't call them that'
Ricky: What do leprechauns prefer to be called?
Karl: Gnomes or something.


I loved reading this, and watching the show. He does mention at the end of the book some of the stuff he done with Warwick Davis on the latest 3 part special Idiot Abroad, but it would be nice for that to be a separate book too.

I love Karl, he is so funny. I would recommend this book to all who want a good giggle! Some fab pictures too!
Posted by Unknown at 13:59