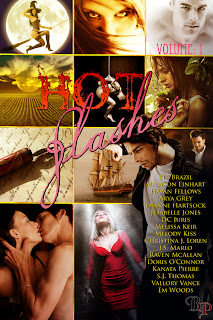 An Unexpected Visitor by Melody Kiss
Can a simple visit from a friend turn into a night of passion for Cassie?
Beauty in the Darkness by Dianne Hartsock
Kenny is the most beautiful thing Don has ever seen, bound by ropes knotted with love. Don can set him free, but without experience, can he be the lover Kenny needs?
First Sight by S.J. Thomas
He has sought her for centuries but at that first sight he knows she is the one he seeks, the one he must claim, no matter the cost.
His Lordship's Journal by Lee Brazil
In a time where society dictates that to be together is to court death, an aristocrat cannot resist finding every excuse to be near his estate manager.
Ghost Story by D.C. Juris
True love never dies.
Her Performance by Madison Einhart
She's the conductor's protege—the only one worthy of his latest masterpiece, and all too eager to perform... for him.
Robin's Confession by Dianne Hartsock
Robin has a secret he's never told anyone, until now. But will Jesse accept him for who he truly is, or will Robin find himself alone and heartbroken once again?
His Truth by Doris O'Connor
His truth was beautiful and terrifying. Does she run, or does love conquer her fears.
Human Pleasure by Arya Grey
Naked, cold and chained in silence. Can you accept your darkest fantasy?
Spin the Bottle by Lee Brazil
Corey takes his seat in the circle, ready for his chance to spin the bottle, but Tarek's shocking revelation brings his dreams crashing down.
Keeping Christopher Safe by Dianne Hartsock
Julian will do anything to keep his sweet Christopher safe, even give his body over to another man's desires. But can Christopher live with this, or will his jealousy put them both in danger?
Louisiana Love by Jesabelle Jones
One mirror, one chair, one man, one woman, passion and one sexy steamy night of love in Louisiana.
Fresh Meat by D.C. Juris
Homeless. Alone. Hungry. Unloved. If given the choice of that life or the pierce of fangs...which would you choose?
Second Sight by Dianne Hartsock
Detective Robert's partner is anything but ordinary; smart, beautiful, psychic. Robert wants to makeBrian his partner outside of work as well, but does Brian's latest vision bring them closer together or simply gives Brian the excuse to push Robert even further away?
Human Sacrifice by Kanata Pierre A young recently dumped Ph.D. candidate releases a sexy Aztec priest from a phallic-shaped, blue crystal on an archaeological dig.
Sweet Surrender by S.J. Thomas
Having taken her captive Jared claims Kara is his. Will she resist or will she surrender to her desire?
Tarek's Rule by Lee Brazil
Would it be foolish or unkind for Tarek to take advantage of Corey's disappointment with Amir's duplicity to press his own suit?
The Artist by Vallory Vance
After weeks of sketching Elise's nude form, Jacques can no longer contain his desire for the flirty grad student.
White Thigh Highs by Melissa Keir
Shelby's day job doesn't know about her night job or her white thigh highs.
The Destiny of Lars by Havan Fellows
Lars must choose...the destiny prophesized for him or the destiny love dictates for him...his brother who shares his lineage or his lover who shares his heart.
The Prospect by D.C. Juris
Initiation has a price, but Jeep is willing to pay.
The Soul of the Sun by Raven McAllan
Holding the sun in his hand gives Lee more than just sunburn. But is he ready to be truly burned by his soul mate?
Unexpected by J. S. Marlo
When the weather derails Riley's Christmas plans, Blythe schemes to cheer her up.
Where there's Fire by Em Woods
When Tojil, the Mayan god of fire, returns to find his ex-lover standing in his home, will the heat
consume them or will the flames die out?
The Captain's Cabin by Lee Brazil
While the captain and first mate negotiate a shipment, Mick cleans the captain's cabin then strips
down to wait, avoiding the threat of watching instead of participating in their sexual play.
Witch Way to Say I'm Sorry by S.J. Thomas
A reluctant witch finds an unforgettable way to say sorry to the warlock who loves her.
An Unexpected Death by Christina J. Loren
Death takes a back seat when Mrs. Buttercup has a party to throw..

27 Hot Flashes from some great authors! :)

There's not really much I can say about this book. Not because it was bad, quite the opposite infact! But if I say too much, you'll know the whole story of each 'Flash', as they literally are what they say they are, 'Flashes'. Each story is roughly no longer than 5 kindle pages long. Great idea for short journeys when you want a quick fix from your favourite authors ;)