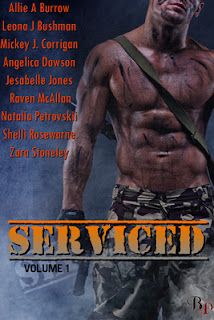 
For One Night Only by Allie A Burrow
Corporal Mark Butler is back in the country for one night only, and Kate isn't about to let the opportunity pass her by...

Reds, Whites, and Blues by Mickey J. Corrigan
He was stationed in Key West during the Vietnam War when he met the artsy girl who didn't capitalize her name.

Leave Taking by Angelica Dawson
Will has a surprise for his wife for the tenth anniversary. He's coming home.

Major's Minah by Raven McAllan
Oliver knew his duty, he needed a wife and heir. Minah knew what she wanted—him. Could his ideals and her dreams be the same? There was only one way to find out.

Knock Out by Natalia Petrovskii
Warrant Officer Ryan Wilson is handsome and arrogant and Corporal Nicole Muchmore enjoys taking out her frustration against him on the sparring mat. One day the tables turn and before she knows what is happening he is exacting a punishment of another kind-this time totally pleasurable.

A Chance At Love by Shelli Rosewarne
Suzanne had always told her big brother that being a soldier was too dangerous, so when she sees the uniformed officer in front of her house she knows exactly what he's here to tell her. While Aidan may set her blood on fire, Suzanne has already lost one soldier she loved and she's not prepared to trust her heart to another one.

Taking Command by Zara Stoneley
How far would you go if the man you loved walked away, so you didn't suffer? Would you take a risk, take command?

Riding Out the Storm by Natalia Petrovskii
Corporal Anna Jordan keeps her secret fantasies about her superior officer, Lieutenant Kyle Campbell, well hidden. When the two must take shelter from a winter storm during a training exercise she has no idea her wildest dreams are about to come true!

I received a copy of this book from one of the authors (Allie A Burrow) in return for an honest review!

Here's my short reviews on each story:

For One Night Only by +Allie A Burrow ★★★★★
I loved this story. The scene in the train was one hot ride! But I loved how quite obviously Mark and Kate loved each other. Allie done well writing this story of 2 people in a long distance relationship,  I think she captured their longing for each other perfectly :)

Over A Dead Body by +Leona Bushman ★★★★
I quite enjoyed this story. I liked the start of the story, how Riker was automatically thought to have been the killer, and how it just so happened to be his ex who was called in to the scene ;) The sexual tension in this one was high between the 2 characters, and eventually you see where that tension takes them!

Red, Whites and Blues by Mickey J Corrigan★★★★★
Fantastic story :) I loved how this one literally got straight down to the dirty. Rolling around in the sand, naked with a hot stranger, what a way to spend your day! But I got goosebumps during the last few paragraphs. Those last paragraphs were my favourite, very sweet indeed :)

Leave Taking by +Angelica Dawson ★★★★★
A hot short from Angelica. I liked this one, the passion between husband and wife was huge. I can't begin to imagine what it is like not to see your other half for long periods of time, but if the reunion is anything like what these guys had, I'm sure all those who have moments like this, always enjoy it :)

First Date: The Italian Colonel by Jessabelle Jones★★★★★
This was another quick story, but a good one. The Colonel was a damn fine Italian, who seemed like the type of guy who could stop hearts in an instant! Great sex scenes in this one too, I liked the truck scene ;)

Majors Minah by +Raven McAllan ★★★★★
Wow. Ms McAllan has a way with words, and certainly has a way with her historical romances ;) I really enjoyed this and would love to read more of Minah and Olivers life together.

Knock Out by Natalia Petrovskii★★★★
A lovely story about Nicole and Ryan. Both like to spar with each other in the gym, until one day, even though Nicole thinks he's an arrogant pig, Ryan changes things and kisses her. There starts a lovely relationship, and plenty of secret sex :)

A Chance at Love by +Shelli Rosewarne ★★★★
Suzanne is told right at the start that her brother has been killed in action, which devastates her and her brothers friend Aiden who came to give her the news. Aiden stays over as he can't get straight back home, and Suzanne sees and opportunity to feel something more than just pain for a while. a lot of sex later, a beautiful love story arrived :)

Taking Command by +Zara Stoneley ★★★★
Jade and mike meet again, him a good friend of the family, 6 months after a wild night of passion together. Now at first I was like 'wtaf! Shes gonna drug him!' But when you see she doesn't its all good :) a good story from Zara!

Riding Out the Storm by Natalia Petrovski★★★★★
I liked this one. Anna and Kyle both have to take shelter in a cabin somewhere when a storm comes in while they're on a training exercise. Anna has always known Kyle was a good looking dude, and certainly finds out just what he's capable of when they're alone together... freezing cold.... and need a way to keep warm ;)

All in all I give this book 5 stars! I've already read some works from some of these authors, and like them, now I've found more authors too watch out for! I really enjoyed it (even though it took me a while to get through as I've been kinda ill quite a bit recently), and look forward to reading more stories from these authors :)
Posted by Unknown at 15:14