Killer on the Road by Charles O'Keefe tour and interview!!

Title: Killer On The Road

Formats Available In: All eBook formats and Print 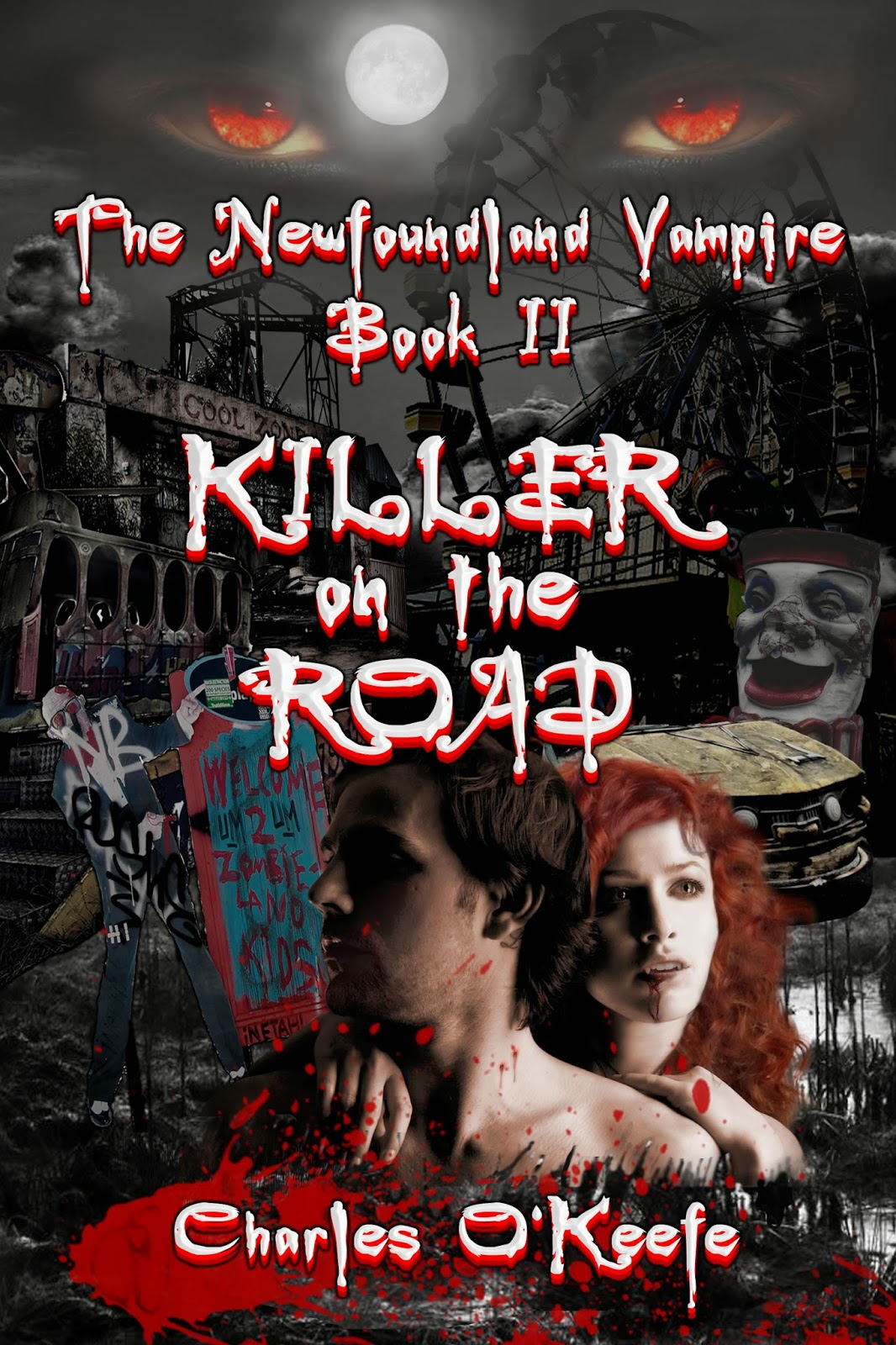 Blurb: Joseph O’Reily is still adjusting to the lifestyle and the dangers that come with being a new vampire. He and Cassandra recently fought to the death with Cassandra’s estranged husband John Snow, and now Joseph has experienced his first ménage a trios, as only a vampire can. As if all of this was not complicated enough, he and Cassandra have been tasked with hunting down and killing a rogue vampire, Donald Rathmore.

Another of John Snow’s creations, Donald is an evil misogynistic killer in his own right. Donald has no interest in avenging his creator’s death, but killing Cassandra is at the top of his list.

While Donald continues his murderous spree, Joseph and Cassandra always seem to be one step behind him. The chase is further complicated as they encounter other vampires and learn more about the mysterious nature of the Vampire Council and the coming war between good and evil.

Joseph is only now beginning to trust Cassandra, and this trust will be shaken when he discovers she has even more secrets than he imagined. Her idea of justice and morality is at complete odds with his own. Despite all his powers and growing skill, Joseph is tested physically as a vampire and emotionally by Cassandra. This time the answers and challenges may be too much for the young vampire to handle. 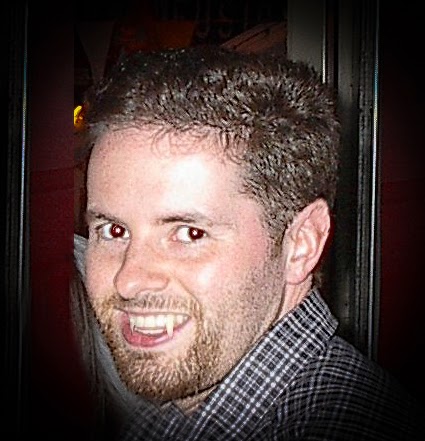 Charles O’Keefe lives in the beautiful province of Newfoundland, Canada, with his wife and two feline ‘children,’ Jude and Esther. He works as an I.T. support guy and enjoys many hobbies and activities that include writing, reading, watching fantasy/science-fiction movies and television shows, gaming, poker, walking, acting, martial arts and of course fantasizing about vampires.

He currently has two novels out, books 1 and 2 of "The Newfoundland Vampire" series.

1. Please tell us a little about yourself
First off thanks for having me on your blog and for being part of the tour, I appreciate it.
I'm 37, married, no kids, 2 cats. Aside from writing I have a regular (often dull) day job. I have a book series called "The Newfoundland Vampire" that I'm very proud of (book 2 just came out). Aside from those things I'm an animal lover, vegetarian, agnostic and an environmentalist. I have a bunch of hobbies including reading, writing, walking, watching TV, movies, piano, going to concerts, role-playing, board games, Pilates, martial arts and acting. I enjoy meeting new people and I love going to geeky conventions.
2. How did you come up with the idea for your book?
It had been in my mind for a while (book 1). I have always loved the idea of a vampire and I just had the idea one day of combining my love of vampires with that of where I live (Newfoundland) seemed like a perfect fit. I suppose like lots of people I've always fantasized about being a vampire and since they're not real (surprise! ;) this was the closest I could come. So now you also know the main character, Joseph, is about 90% me. For book 2 the ideas just keep coming, I started writing it immediately after I submitted book 1. It’s a direct continutation of the story. In terms of what would happen I spent a few hours coming out with an outline and then got to writing. I’m lucky that as I have traveled a lot I decided it would be fun to have my main characters go to place I’ve been (and a few I hope to visit someday).
3. When did the characters first pop into your head?
Well as I said I cheated a bit, the main character is me, or at least a younger-vampire version of myself. I thought it would be fun to explore the ideas of immortality, power and temptation in relation to myself. Also it's very interesting for me to imagine how this fictional version of myself makes different choices than I did (obviously) and how he/me would deal with some difficult moral situations. Cassandra, the female lead, came a little later. I wanted to have a woman turn a man into a vampire for a change and then decided to work in real people who had mysterious/unusual deaths. So Cassandra is loosely based on Catherine Mandeville Snow, a real person who was the last woman hanged here in Newfoundland in 1834. I also knew right away I wanted a version of Count Dracula, you'll have to read to see exactly what I did to him.
4. Without giving away any spoilers, was the story always straight forward for you to write, or did it pop up any surprises along the way?
I found once I got going the story flowed pretty quickly. With that said I did go through a lot of re-writes (16 drafts total for book 1). So the final version ended up a lot different than I thought. For book 2 (which was only 8 drafts) there was still some surprises. It turned out I didn't give Cassandra enough to do/a strong enough voice (and I had too much sex). Her becoming a more well-developed and realistic character was a great surprise and something I'm very thankful to my editor, Pat, for making happen.
5. Where do you like to write?
I generally like to write in the kitchen on my laptop, I can look outside to take breaks and it's quiet there in the morning. I also have a little nook/desk area just often the kitchen where I write as well. Generally I do almost all of my writing at home but I have done some in Florida and on some smaller trips as well. I find it hard to write with a lot of distractions/noise around, so I tend to pick quiet places.
6. Do you read a lot?
I can't say I read as much as I used to. Recently I started reading comic books again and I found that’s replaced reading novels to some extent. I find that when I read a book I don't like it slows me down a lot, as such I'm going to have to be more picky about what I pick out to read. So the short answer is no, probably only 10-15 minutes most days but I go through phases where it can be more.
7. Who are some of your favourite authors?
Peter David, Stephen King, Ernest Hemingway, Robert Kirkman, Robert Jordan, J.R.R. Tolkien, George Orwell, Richard Matheson, Anne Rice and Jamie Wasserman.
8. And last but not least, have you any words of wisdom for aspiring writers out there?
Sure I'll got some tips. Don't underestimate the importance of an outline/planning for a novel. Get lots of honest input from outside sources. Get an editor! I can't tell you how many terrible self-published books are out there that could have been good but without an editor they just fall to pieces. Don't expect to get rich overnight, the market is very hard to break into, be happy with small successes and keep writing. Despite what you may have heard people DO judge a book by it's cover, spend the time (and most likely money) to get a quality cover done you're happy with, people will notice. Work hard at promotion but know when it's time to scale back and focus again on writing, people want to see sequels/other works, it makes you established and gives readers a sense of security. If you love to write, keep at it. It takes time so be patient. Be prepared for rejections and harsh criticisms, you'll get them the same as any author. You have to not take things personal when it comes to writing, that’s not always an easy thing to do.
Thanks again for the interview, excellent questions that I had fun answering :)
Many thanks
You're welcome! Have a great day!