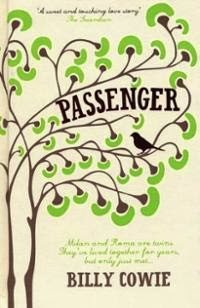 When a scan reveals that Milan is carrying his twin sister inside him, his world is turned upside down- or inside out. His new-found sibling Roma is a nicotine addict, finds sex altogether to bumpy and believes there are only 147 people in the world. She has never seen the moon, never tasted her favorite wine. But as Milan begins to introduce her to the world outside, he discovers to his surprise how much she has to teach him in return.

I picked this book up for 24p in my local book stores sale bin. I have to say I totally judged this book by the cover, I didn't even read the blurb just really liked the cover so bought it (and lets face it, for 24p you pretty much can't go wrong). Once I read the blurb, I was rather intrigued.

Milan starts hearing tapping, and it's always in the form of classical music. He starts to think he's mad, but when his back starts to ache, he sees a doctor. Turns out, his unborn twin is inside of him. A rare case of Fetus-in-fetu. Now this really made me want to finish the book.

On the front cover there is a quote from The Guardian, which says 'A sweet and touching love story', and I couldn't agree more. The love between Milan and Roma is a great one.

I have to say though, I did think the book was a little fast paced, you'll understand when you read it yourself. I thought the things Milan taught Roma all seemed to go a bit fast, she learnt things rally quickly,, which to me sometimes seemed to make the story a little unbelievable. Like sometimes Roma and Milan would have conversations, and I thought this all felt like Roma wouldn't have actually understood what was being said and wouldn't have been able to answer the way she did.