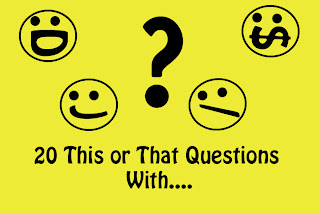 Thianna D is over this morning and has grabbed herself a nice cool drink.

Food
I'm not much of a foodie I must admit. If we could just live on food tablets I would probably be a very happy person. But if I had to choose...
My favorite food is strawberries - hands down. I could eat pints of them in one sitting.
My least favorite food - anything that comes from the water. Me and fish don't get along.

Sweet or savoury?
Kind of depends. While my fav food is strawberries, I am more of a savoury girl. Intense spices and the way the tastes stay on the tongue. I like spices too, but not too spicy if you know what I mean

Salad or sandwich?
Ugh. Neither. I hate salad and am not much of a sandwich person either.

Macdonalds or Burger King?
Depends on what I am going for. For a burger, Burger King - Micky D's hamburgers are too salty. For chicken, I prefer Micky D's nuggets. I agree, chicken nuggets are good!


White meat or red meat?
I'm a white meat fiend. The only time I will eat red meat is if it has been bbq'd or smoked. Otherwise I can't stand it.

Movie or book?
I much prefer a book. With a book, it is up to my imagination to create what I am reading. A movie gives you their interpretation. Take Harry Potter. The first two movies gave the visual that was in my mind but the last ones did not. I prefer the mental jog of a good book over a movie/tv any day of the week.  Me too, I prefer to remember it the way I saw it in the book rather than the movie.

Movies or TV shows?
If I have to watch something, movies. I do not watch television at all and haven't for almost 4 years. While most of the time there is nothing on at the local theatre worth watching, I have to admit I loved the newest Star Trek movie Into Darkness. JJ Abrams has truly created a fantastic new Star Trek franchise and as a Trekkie it is wonderful to see. I haven't seen the latest one yet, but looking forward to it.


Harry Potter or Lord of the Rings?
Books or movie? LOVED LOVED LOVED Harry Potter. I read the books and listed to the books on audio so many times I couldn't tell you how many. I enjoyed the movies but still always return to the books. When it comes to LoTR, I can only watch the movies. Tolkein was a wordy bastard and I find myself trying to fight to keep my mind on his books. This is what I'm worried about with starting LOTR books :/

Damon or Stefan Salvatore?
Uhhh, who? I looked up Stefan and found he was a character from Vampire Diaries. As I don't watch television I literally have no knowledge of who he is. I am assuming Damon is from another television series? They are both brothers from Vampire Diaries, Damon is the totaly bad boy, Stefan a bit softer.


True Blood or Vampire Diaries?
Again - don't watch television so I have no reference but vamps are always good, right? :) Vamps in both shows (but VD is better in my opinion!)


Friends or Sex and the City?
OOOH, this one is difficult. I love both series intensely and have them both on DVD though I haven't watched them in years. But Friends wins out, I think, just because I prefer sitcoms to drama on a daily basis. But if we are going for sexiest character, it would have to be Big. Nom Nom Nom. Oh I loved Mr Big too!!


Star Wars or Star Trek?
Ooh, another hard one, but if I had to choose, it would be Star Trek every time. I loved Gene Roddenberry's view of the future, of races getting along, of there being peace out there rather than just constant war which most sci-fi people focus on. My favorite series are the Original (never wear red down to a planet or you are gonna die), STNG and Voyager and I do like the new orginal that JJ Abrams has created in the movies. He pays wonderful homage to what GR created.

Random
Dominance or submission?
I am submissive so I am attracted to naturally dominant men.

Kisses or hugs?
I grew up in a family where physical was not done. Nobody touched, nobody hugged. So, I do not know how to do that kind of thing. It always feels fake to me when someone hugs me. So we know not to hug you if we ever meet :)

Bath or shower?
Shower for every day but I love baths...just laying back and letting the water wash my stress away. See, I can't do that, I get bored in the bath!

Call or text?
I hate phones. LOL People think I'm crazy, but I absolutely hate phones. So, if I have to use one, I prefer texting all the way.


Date night: stay in or go out?
Both. I love to go to the theater and see plays and go out to listen to the symphony, but I also enjoy what staying home can bring. *weg* :D

Singing or dancing?
If I have to do one, I would choose singing. I am a coloratura soprano. I can't dance worth beans.

Vanilla or kink?
Kink! Kink! Kink! Don't give me any vanilla it will bore the hell out of me. Lol

Cotton or satin?
I love the smooth feel of satin, especially for sheets or lingerie. But I do live where it gets hot so cotton is my friend from April through October. Ooh I can imagine sleeping on satin in extremely warm weather is uncomfortbale

Anything you'd like to add, or anything new you'd like to tell us about while you're here?
Hmm, Well, I am in one of those 'holding patterns' where I am between books. My last release, Bane of My Existence, came out in April and I am working on its sequel.

In August, though, I am excited for my next release which will be through LazyDay Publishing.

As Natural As Breathing is the first in a gay spanking romance series. I set it in the town I am living in right now and that and the characters themselves have made this story very real to me.

For Christian Darringer, life isn’t worth living. Just back from the Middle East; scarred and with permanent damage to one leg, he does not think anyone will want him for anything. Meeting a gorgeous man he finds himself thinking about constantly is not in his plans. Pulled toward the startling younger man with striking blue eyes, he begins to question a lot of things – especially his sexuality. Not one to hide from a challenge, he plunges ahead only to find himself more than just attracted to Logan who is full of life and joy, he finds himself head over heels in love.

Logan Mannette has almost everything he ever wanted: loving parents, happiness, friends and security. The only thing missing is finding the love of his life, a love that is just like his parents’. When he meets Christian at a party, everything changes. Instantly attracted, he does his best to help this sad man and quickly finds himself feeling more than he has ever felt before. Raised in a domestic discipline household, he holds that ideal as what he wants but his interest in spanking became a fetish and when Christian admits that he wants to be spanked, Logan believes he might have found the perfect man.

Just as everything begins for them, Christian’s past intercedes and one of his brothers makes waves about him dating a man. If it weren’t for Logan’s support, he might fold; but with the love of one amazing man, Christian finds that living his life rather than just existing is as natural as breathing.

Thanks so much for stopping by, hope the weather is nice out there!
Posted by Unknown at 00:00

Email ThisBlogThis!Share to TwitterShare to FacebookShare to Pinterest
Labels: ?, 20 This or That Questions, Thianna D