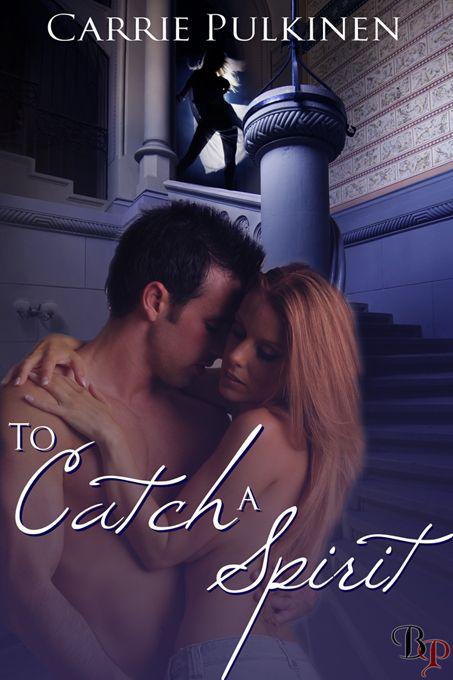 Title: To Catch A Spirit

Blurb: A psychic who's afraid of ghosts and a millionaire with a haunted past and a hidden power find that only love can catch a spirit. With love, all things are possible—especially if you need to catch a Spirit.

Psychic Allison Dupuis has a soft spot for Logan Mitchell, even though she's never met him. All it takes is one encounter for the millionaire's true emotions to slip through Allison's shields, and she is intrigued. He needs her help, but Allison soon discovers that the kind of help Logan needs is the kind she isn't willing to give. Logan has a ghost, and Allison doesn't work with spirits anymore.

But the ghost is the least of Logan's problems. Born an empath, Logan is constantly barraged with human emotions. And while his talent has come in handy in the business world, it's about to drive him insane. Literally. Logan has OCD, and his ability triggers unbearable attacks that have him counting and cleaning until he collapses from exhaustion.

Sex and money. That's all anyone wants from him. Even worse, he's plagued with recurring visions of his future wife's death, so Logan has spent his entire life avoiding love. He's given up hope of ever having a normal life, until he meets Allison. She's everything he's ever dreamed of, and now he has to decide if loving her is worth risking her life.

If she'll even have him. Allison's lost too much already — her mother to cancer, her father to suicide. But, Logan is so charming and so real, she can't help but fall for him. Now she has to overcome her fear of commitment...and ghosts...or face spending the rest of her life alone.

She sensed them as they drew closer to her—many different spirits, their energy buzzing on varying frequencies.

"One at a time, guys. Please." she said. But they didn't listen. These were the spirits of the mentally ill, after all. Taking turns wasn't their concern, and they all rushed her. She felt their presence closing in on her like an avalanche, and she was consumed. Every mental illness imaginable was thrown into her psyche as she tightened her grip on Gage's hand and slumped down in her chair.

"Allison! Allison, are you okay?" Gage's voice was a distant echo as she fought to hold on to herself. She was slipping. Sliding into the depths of despair and the spirits were pulling her down.

"It's... No... There's a light... You need to... You need to go to it." She tried to help the spirits cross over, but they wouldn't listen. There were too many. Twenty at least, and they were so consumed by their own illnesses they thought of nothing else. Paranoia, depression, anxiety. Allison felt it all, and it was going to kill her. The pressure. So hard to breath. Her hands cradled her head as the migraine overtook her. Sharp, pounding pain had her crumpled on the floor as she drew her knees into her chest and rocked back and forth.

"Make it stop. Please, just make it stop." She was paralyzed. Frozen by the anguish of the tortured souls that forced themselves upon her. Hot tears streamed down her face and blood trickled from her nose. She gasped for air as she heard a faint voice call, "Get her out of here!"


Check out the rest of the tour here:

Carrie Pulkinen has always been fascinated with the paranormal. Of course, when you grow up next door to a cemetery, the dead (and the undead) are hard to ignore. Pair that with her passion for writing and her father's insatiable love for monster movies, and you've got the perfect recipe for an exciting storyteller.
When she's not writing stories of amazing sex with devilishly handsome men, Carrie likes to read, take pictures, and play with her kids. She also enjoys hearing from her readers, who can write to her at carrie.pulkinen@hotmail.com.

If you enjoyed this story, Sweet Release, her first published work is also available from Breathless Press.