*** REVIEW*** Call the Midwife by Jennifer Worth 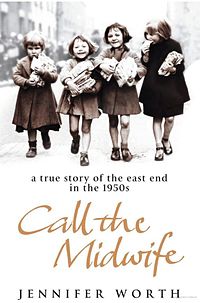 Call the Midwife by Jennifer Worth

Jennifer Worth came from a sheltered background when she became a midwife in the Docklands in the 1950s. The conditions in which many women gave birth just half a century ago were horrifying, not only because of their grimly impoverished surroundings, but also because of what they were expected to endure. But while Jennifer witnessed brutality and tragedy, she also met with amazing kindness and understanding, tempered by a great deal of Cockney humour. She also earned the confidences of some whose lives were truly stranger, more poignant and more terrifying than could ever be recounted in fiction. Attached to an order of nuns who had been working in the slums since the 1870s, Jennifer tells the story not only of the women she treated, but also of the community of nuns (including one who was accused of stealing jewels from Hatton Garden) and the camaraderie of the midwives with whom she trained. Funny, disturbing and incredibly moving, Jennifer's stories bring to life the colourful world of the East End in the 1950s.

I bought this as a set of all 3 of Jennifer Worth's books.  I had started watching the TV series just before buying these, and really enjoyed it (I am halfway through season 2 now). The characters in the show are brilliant, all the actresses and actors done an amazing job.

It took me a long time to get round to reading this properly, but when I did, I could hardly put it down! What a fantastic book of stories from Jennifer's days as a midwife in the East End. The first thing I remember thinking about this book, was how different everything really was back then in the 1950s, to what it is now. Midwifes rode on bicycles to get to their patients, the women were afraid of giving birth in hospitals and therefore opted for a home delivery almost every time. But the living conditions were so different. Jennifer talks about families with 6-10 children, cramped into a small 2 bed roomed flat, no toilet (they shared one in the middle of the housing block), washing hanging from the stairs and lines hung across the rooms.

Each chapter brought something different to the book. There are 2 paragraphs of the book I remember fondly, and wanted to share with you.

In a chapter called 'The Bicycle', which was all about Chummy, you meet a lovely young fellow called Jack. A young boy, who befriends Chummy when she is learning to ride her bicycle, and helps her along the way. Once Chummy can ride by herself, Jack walks with her to her night appointments, to make sure she is safe. They say he was like her protector, bodyguard. Chummy does something really nice, and asks her father to buy Jack his own bicycle.  The end of the chapter goes like this:


Twenty five years late, a shy young girl called Lady Diana Spencer became engaged to marry Prince Charles, heir to the throne. I saw several film clips of her arriving at various engagements. Each time when the car stopped, the front nearside door would open, and her bodyguard would step out and open the rear door for Lady Diana. Then he would stand, jaw thrust forward, legs slightly apart, and look coolly around him at the crowds, a mature Jack, still practising the skills he had acquired in childhood, looking after his lady.

This passage gave me goosebumps (and again just typing it out). I thought this was wonderful, and made me so pleased to think if Jack like this.


He chatted happily all the time we had our tea. I told him how much I liked and admired his family. He was a proud father. I told him how impressed I was that they all spoke Spanish so fluently.
"They're a clever lot my kids, they are. Cleverer than their old dad. I never could pick up the lingo, meself."
Quite suddenly, with blinding insight, the secret of their blissful marriage was revealed to me. She couldn't speak a word of English, and he coulnd't speak a word of Spanish.

This was a chapter about Conchita and Len warren, a very happily married couple who had just had their 24th child! I loved this couple, both in the book and on screen.

The characters of this book really stand out. The only thing I have to say is that the 2 midwives, Trixie and Cynthia, aren't in the book very much, and are in the TV series quite a bit. That may change in book 2 and 3 though, I don't know yet until I read them. I feel a bit strange calling them 'characters', as they were real people, not fictional, but lets go with 'characters' for now.

Jennifer is the main character (obviously), and is such a great lady. You can feel her love for what she does all through the book. Although at time,s he has admitted, she felt like she couldn't go on, she got nervous in certain situations, but she always plowed through, got things done. She cared very much about her patients, Mary in particular stands out in my memory.

I love Sister Julienne, and really enjoyed reading about her. She semed like a very strong woman, but very caring and forgiving.

Sister Evangelina was a funny one. A big woman, with not a lot of patience :D But in her own way, she cared about every one of her patients, and knew just how to converse and react around them (read the chapter about Mrs Jenkins and you'll know what I mean!).

Sister Monica Joan, bless her, a lovely sweet old lady, who babbles on about lots of things that have nothing to do with the conversation! She often talks about the stars, the planets and all things space related.

Sister Bernadette I can't remember being in the book much, but her character on screen is so warm, I can't see how anyone would fail to like her.

Trixie and cynthia, like I said, weren't in the book much, but I'm hoping they will be in the other 2 as their characters on screen were very likeble indeed.

Fred, bless him, is the general handyman around Nonattus House. He always has some scheme on the go, whether it be maiing Toffee Apples in his kitchen, or keeping a pig to raise and sell!

There were other chapters which gripped me, and I have to say, the one which got me the most was the last chapter of the book. Frank and Peggy. I'm sure this will carry on into the next book, as I remember seeing so much of theri story in the TV show. A very heartfelt story between these 2, but I will not spoil it for you. All I will say is if it goes like the TV show did, tissues will be at the ready.

This was an amazing book, and I think everyone who reads it will really enjoy it. Jennifer does a great job at re-telling her stories, and really pulls you in to what it must have been like for all those living in those days. If you haven't already read it, I suggest you grab yourself a copy, and get comfortable on the sofa :D I gave my copy to my next door neighbour the minute I finished it!
Posted by Unknown at 15:43