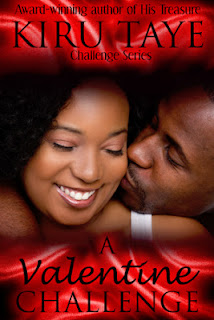 A Valentine Challenge by Kiru Taye

Book 1 of the contemporary romance Challenge series, set in Nigeria. Three friends. Three challenges. Are they willing to risk everything for love?

Ex-soldier Michael Ede’s spent his time building his life exactly the way he wants it. Life is good. Or so he thinks. So when his friends set him a challenge to exorcise the memory of a woman from his past, he expects it to be a walk in the park.

Socialite Kasie Bosa is spitting fire at men. Her long-term boyfriend has asked for a break via text message of all things. How dare he? She’s told him to go take a dive into the River Niger. And not so politely too. So the next man who dares to cross her path is at risk of getting shredded with her spa manicured nails.

Bad news for Michael who has chosen her as the object of his challenge. But neither of them can deny the sizzling chemistry between them nor control their responses, it seems. It’s the season of love. Can either of them escape unscathed?

I recieved a copy of this from the author in return for an honest review.

I read this over 2 days, and I really liked it!

I have to say (and apoligise greatly to Ms Taye), this is the first of her books I have read! And it certaintly won't be the last.

I loved the story behind this, it reminded me of a great movie I love, 'She's All That' starring Freddie Prinze Jr and Rachel Leigh Cook. Michael is out with friends at a club, when Kasie walks in. Michael being teh gorgeous woman eater that he is, is challenged by his friends to prove he can 'get' her. Off starts the challenge of wooing Kasie, but the catch? Well, Michael who owns his own car company and more, (and is rather rich by the way), is not allowed to let Kasie know who he is. Therefore he sets off and becomes her driver while she's in town.

Kiru has written this really well, and the chemisty between the 2 characters is unmistakable right from the start. His gorgeous eyes piercing into her through the rearview mirror, her heart beat getting faster everytime she see's him. So I was really excited to see what this story would bring for them.

Michael sounded absolutly delicious! And I can imagine Kasie to be a very attrctive lady too.  I liked the back stories that popped up from time to time to, but I won't spoil things for you by telling!

I really enjoyed this story, and I'm eager to get onto book 2 in the Challenge series!
Posted by Unknown at 08:25