Our day at the Bon Jovi Concert, Sunderland!

Well on Wednesday we were at the +Bon Jovi concert in Sunderland, and it was bloody fantastic!!

We set off at around 1pm and went over to Sunderland. We wandered around the town for a little while, then found a chinese buffet to go to for dinner. It wasn't great, but it was food right?! Chris's (OH) mate came to pick us up (Darren), dropped his taxi off at the office, then the 3 of us walked over to the stadium. Got straight in, and straight in to the Golden Circle part! This was about 4pm. 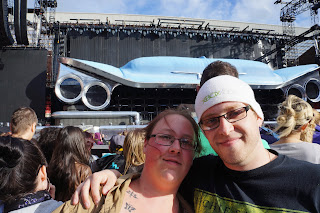 Here's me and Chris before the show >

The stage was set up to look like a giant car and it looked great!

After a little wait, +Bon Jovi came on at 8pm, and opened with the fantastic 'Thats What the Water Made Me'.


Note: Phil X was filling in for Richie Sambora 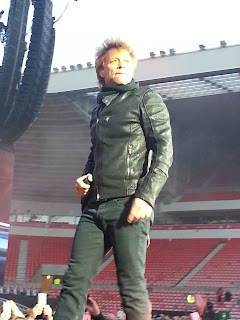 The show was amazing as always, although I have to say the fans didn't seem to be as excited as I'd thought. When singing Bad Medicine, Jon walked around the walkway which went between the VIP section and the Golden Circle. We got pretty damn close! Here is a pic I got > I was so excited! I screamed a hell of a lot, and could not actually believe he was right there infront of me! 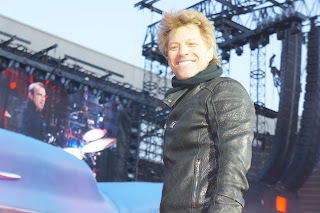 The concert finished at 10.30, a 2 and a half hour set and it couldn't have been better!

Always was played as the final sing, and Jon was on form with his notes.

A great night was had by all :D Off to see them in glasgow on July 3rd, so another post will be on its way then!
Posted by Unknown at 10:06

Email ThisBlogThis!Share to TwitterShare to FacebookShare to Pinterest
Labels: Because We Can Tour, Bon Jovi, Golden Circle, Sunderland Stadium of Light