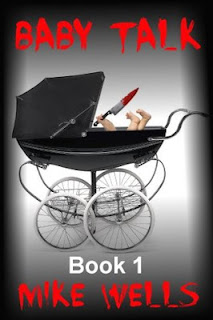 In this creepy horror novel, Neal Becker is convinced that his 5 month old baby daughter can talk. But that's impossible...isn't it? Except that Neal didn't really want to get married in the first place and pushed his wife for an abortion. And now, Baby Natasha knows it. She's out to get Neal, or so he believes. Join the two in a terrifying battle for survival that will make your blood run cold!

I read this over the last 2 days, just a short book though. It came up on one of my GoodRead friends lists so thought I'd give it a go.

Firstly, the book ends rather abruptly, and you have to buy the second book to find out what happens. A lot of people have left reviews on it saying they think this is a very nasty, kiniving trick by the author. Me... I think it's rather clever! Any author wants people to buy their books,a nd if someone likes them they will. So any one who has read Baby Talk book 1, and liked it, will go and buy book 2.

Anyway, on with the review. It was a good book, but not great. The whole story is about Neal, his wife Annie and their baby girl Natasha. Neal never wanted the baby, and that is made clear numerous times throughout the book. But, he and Annie married anyway and had their daughter. At 5 months old, Natasha speaks to Neal, things start to happen, and Neal starts to think Natasha is out to get him.

A bit freaky I suppose, but I didn't get the horror of the story really. I did want to finish it to see what happened though, so I guess the author did capture me! I will be buying book 2 at some point and finishing off the story.
Posted by Unknown at 15:09