WARNING! SPOILERS AHEAD IF YOU HAVEN'T READ THIS YET!!! 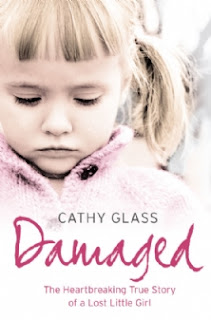 The Sunday Times and New York Times Bestseller. Although Jodie is only eight years old, she is violent, aggressive, and has already been through numerous foster families. Her last hope is Cathy Glass…

Cathy, an experienced foster carer, is pressured into taking Jodie as a new placement. Jodie's challenging behaviour has seen off five carers in four months but Cathy decides to take her on to protect her from being placed in an institution.

Jodie arrives, and her first act is to soil herself, and then wipe it on her face, grinning wickedly. Jodie meets Cathy's teenage children, and greets them with a sharp kick to the shins. That night, Cathy finds Jodie covered in blood, having cut her own wrist, and smeared the blood over her face.

As Jodie begins to trust Cathy her behaviour improves. Over time, with childish honesty, she reveals details of her abuse at the hands of her parents and others. It becomes clear that Jodie's parents were involved in a sickening paedophile ring, with neighbours and Social Services not seeing what should have been obvious signs.

It’s clear that Josie needs psychiatric therapy, but instead Social Services take Jodie away from her, and place her in a residential unit. Although the paedophile ring is investigated and brought to justice, Jodie’s future is still up in the air. Cathy promises that she will stand by her no matter what – her love for the abandoned Jodie is unbreakable.

I picked this book up a few days go as Cathy Glass has very kindly agreed to guest on my blog. So I decided to do a Glass-A-Thon and read as many of her books as I can :) I have since been told by a friend that this is the hardest of Cathys book to read, and I started with it.

This is the story of Jodie, an 8 year old girl who has very aggressive tendancies. Whilst reading the book, you soon find out why.

Jodie had been through five foster carers in just four months, so Cathy agreed to take her in to her home and help her. Cathy soon learns when speaking to Jodie, that her parents and their friends sexually abused her, she was part of a paedophile ring. The abuse you hear about in the story is awful, I had to stop reading a few times, sometimes to tell myself that this was real and not fiction, and other times because I couldn't see the writing infront of me for the tears dripping from my face. I cried a lot reading this book. I cried when Cathy first finds out, from Jodie, about the abuse she suffered at the hands of her father, mother, and other sickening people. I cried when Cathy said goodbye to Jodie at the end when she went to live in a theraputic residential unit. Basically, I cried when Cathy cried.

Poor Jodie was such a little character bless her heart. She was very anxious, aggressive and angry at first. But the more the story moves on, and the longer she lives with Cathy and her family, the more she becomes used to them, and the more she feels safe around them. Jodie had 2 alter egos, Amy and Reg. Amy was a baby, Reg was an extremely angry man. Cathy describes meeting these alter egos, being kicked and spat at by Reg, and having to comfort Amy when she wet herself. And the hallucinations Jodie has, I can't even begin to imagine what this poor girl went through.

Cathy and her family helped Jodie so much, Cathys own children helping out as much as they could, even when they were kicked themselves by Jodie. It was nice to be able to read at the end, that Cathy and her family still have contact with Jodie, and to hear although she is still at the unit, she is doing better. And it was also great to hear that her father was jailed for the awful awful thigns he done.

After reading jsut this one book from Cathy Glass, I can imagine exactly what a kind woman she is to take on all of these unfortunate children and help them. An extremely kind thing for someone to do.

I am looking forward to reading more of her stories, and looking very forward to chatting with her :)
Posted by Unknown at 15:46