NEW RELEASE!!! BREATHLESS PRESS PRESENTS FOR ALL TIME BY J.M. POWERS 17th May 2013

BREATHLESS PRESS PRESENTS
FOR ALL TIME BY J.M. POWERS
17th May 2013 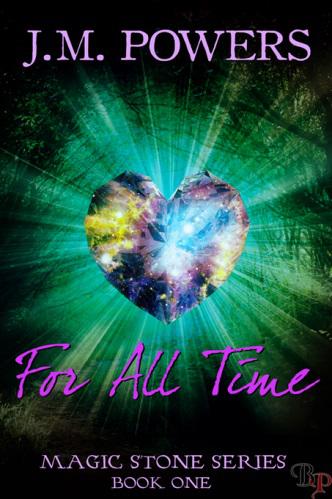 Title: For All Time

Blurb: When Sage stumbles across a man hanging by his coat in a tree, she's torn between fear and curiosity. He introduces himself as Sir Cade, and though his English accent sends a tingle through her, Sage finds his Renaissance clothing and archaic choice of words odd. An accidental touch sends a jolt of inexplicable electricity through her and after they kiss, Sage finds herself on an enchanted adventure filled with medieval mayhem and the possibility of a new life. Will Sage go out on a limb and believe in the magic he professes? Or will she remain rooted to her time without him?

"Shit." She removed her hand, but the after effect still resonated within her. Showered in the sensation, yet oddly chilled without the warmth of his touch, an involuntary shiver ran through her. "Who the hell are you?" she whispered.

"C-Cade. Sir Cade—of Surrey." His eyes clouded. "Damnation, woman, are ye a witch?"
Despite the seriousness of the moment, she couldn't help but smile. "A witch? Um, definitely not. I think it's you." She braced herself. "Watch." As soon as she laced her fingers through his, he sucked in a breath.


Her eyelids twitched then closed, and she fell into the depths. The pulse of pleasure, like a bubble of air in a pond, slowly rose and popped at the surface of her mind then rippled. It felt...right.

"Pray thee! Ye must cease this." Cade slipped from her grasp, his eyes wide.

She gasped at the sudden disconnection. "I didn't do...whatever that was."

Oh, that wasn't fury she imagined, but passion.

"I—" What could she say? It was as if there was an electric current pulsing through him. One that singed the very core of her and made her quake with need. Her heart quickened at the thought of his fingers running over her body, searing her with his touch. She had no doubt it could ignite into something truly magical. Kiss him, a voice inside her urged. Surprised by the thought, she almost followed through. Who was this strange man with electrifying hands?

"Is Surrey a planet?" she blurted. "Are you an alien?" The shock created stupidity, the only explanation for her ignorant remark. "I mean, where is Surrey?"

He tilted his head, a crooked smile conflicting with his furrowed brow. "I dare not ask what an alien is. Or a planet for that matter. But, I assure ye, Surrey is here in England."
It took a moment for his words to sink in. "Oh, Cade." She took his hand, but he snatched it away. She eyed the muscles straining against his shirt when he ran his hand over his face. She wanted to rip his friggin' clothes off. "You're in New York."

Shit, the hope in his eyes was painful. She hated to snuff it out. "No. Upstate New York." His blank stare made her continue. "Have you heard of Grand Island?" Still nothing. "In between Niagara Falls and Buffalo?"

He slumped to the forest floor. "Hell's teeth," he whispered. "'Tis not a place I have ever heard of."

"Well, the island is tiny, but surely you've heard of Niagara Falls?" Her giggle cut short at the shake of his head. "Oh shit." She sat beside him. "You're teasing me, right?"
He raked his fingers through his hair. "I jest not."

A thought gnawed at the edge of her mind. A weird, outlandish thought. "Okay." She opened her mouth, clamped it shut, then tried again. "Now let me get this straight. You're from England."


"Aye." He propped his elbows on his knees and cradled his face.

"And you've never heard of New York?" Her words sounded wooden, even to her own ears.

"Or the place of falls." His hair draped over his face. She wanted to brush it aside to see if he was smiling. Messing with her. Anything to ease her racing heart.

J.M. Powers is the alter ego of a woman named Jeannie. Jeannie works a day job while J.M. creates new adventures in the romance genre.

J.M. lives on an island in upstate New York where she tolerates the harsh winters and relishes rare sunny days.

Jeannie, a mother of five, is proficient at crust-free tuna sandwiches, Buffalo chicken wings, and embarrassing her kids by wearing skinny jeans to the grocery store.
Both women juggle between work, play, teaching teenagers to drive, and writing romance novels. Though the days can be hectic and schedules full, everything falls together without broken bones or hearts.

You can find this multi-published author at the following links: