Ravens here with her new release 'Dance to a Different Beat'!


Well here I am again, I'm so glad Dee likes me. (At least I think she does, she let's me pop in and chat)

Of course I like you Raven :) Who doesn't! You're welcome to chat anytime!
So how about dancing? You know the old chat line…(well no you're probably too young but…)
"You dancin'?"
"You askin'?"
"I'm askin'."
"I'm dancin'."
Then you'd go off onto the dance floor and strut your stuff…
At The Dance Studio, Jane is about to dance to a different beat… if she dare… It's up to Sean … 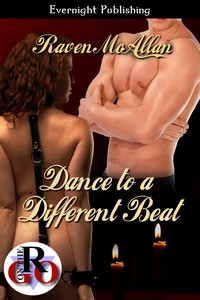 Jane has a decision to make. Meet Sean and face her demons, or hide. Can she allow herself to let go enough to give this experienced Dom the submission he demands?
Jane has always made her own way in life, and the thought of giving up that control has scared her away once.
Sean is determined to show her that true submission is a joy, and not something to be feared. He is not prepared to lose her again.
As they face her fears, can they reach their full potential, or will those demons just prove too much to conquer?

So let me tease you…

As he watched under hooded eyelids Jane ran her hand over the back of a leather chair, and caressed the smooth shape as it swept in a dramatic curve and became the arm. Her fingers splayed out over the wooden covered strength. She'd always been tactile, and Sean could only wish her hands would touch him in the same erotic way. The thought of her mouth on his cock, or himself buried deep inside her pussy, had been the basis of more than one of his climaxes. He despaired of ever seeing if his fantasies lived up to the reality. She looked at him. "So this is vanilla?"
He nodded. Shit, I must seem like one of those stupid nodding dogs you win at the fair. "So?"
"Oh nothing really," Jane smirked. "But a chair like a giant clit isn't what I'd call vanilla."
He laughed. "You, my dear, are the other person to recognize that, let alone remark on it."
"Really? So what does everyone else see?" She sounded genuinely interested.
"Comfortable."
"What?" Jane sounded incredulous as she let him seat her at a small round table carefully screened from the wind, and prying eyes. "Nothing else? It's two-tone red leather, for goodness sake."
He shrugged and went to a side table where an array of fruit was set under muslin covers. "People only see what they want to see Jane. And hear what they want to hear." He handed her a bowl of fruit with everything Ryan had assured him she loved in it. "Don't you agree?"
"Hmm." She ate a spoon full of raspberries. As the deep red vied with the subtle hue of her lips Sean's cock reacted and hardened. Damn, if he didn't wish it was his prick that was being sucked into her mouth. "How d'you mean?" She swallowed and filled her spoon again. "This is good. If I'd known I was coming for breakfast, I'd have ditched the joggers and worn something tidier. So, you were saying?"
"That people have selective sight and hearing, and interpret things in their own way to suit themselves." He paused. Should he? Why not? It can't make things any worse.  "Take yourself for instance. Your friend wants to come to dance, you hear BDSM. Did you ever check with her to see what she'd been told? Nope, you just jumped to conclusions. Why? Have you been to see Ava and Ryan? No, not since she told you what had happened. You worry her and Ry, you know, but does it bother you? Evidently not, you just see them as threatening your safe sterile life and ignore them. And you set the whole thing up, and I could have sworn not five minutes ago you were really happy for them, but you haven't told them that. They both wonder what they've done to insult you. And us? You ran. You saw how well we meshed, and ran. No questions to me, no define what you mean, nothing. You just bottled. And now look at you? You look like a bag lady. Your glow has gone. When are you going to open your eyes and ears and see and hear what's going on? When are you going to give us a chance? Or are you going to let yourself be sucked into apathy and sterility? For fuck's sake remind yourself what you felt with me, tell yourself you deserve more. And bloody well talk."
He slammed his hands on the table so hard both the crockery and Jane jumped. Her spoon fell to the floor, followed by three slices of apple and a grape.
*****
Dance to a Different Beat…Buy links

Nosy links…
Raven lives in Scotland, along with her husband and their two cats—their children having flown the nest—surrounded by beautiful scenery, which inspires a lot of the settings in her books.
She is used to sharing her life with the occasional deer, red squirrel, and lost tourist, to say nothing of the scourge of Scotland—the midge.
A lover of reading, she appreciates the history inside a book, and the chance to peek into the lives of those from years ago. Raven admits that she enjoys the research for her books almost as much as the writing; so much so, that sometimes she realizes she's strayed way past the information she needs to know, and not a paragraph has been added to her WIP.
Her lovely long-suffering husband is learning to love the dust bunnies, work the Aga, and be on stand-by with a glass of wine.

You can find out more about Raven here…