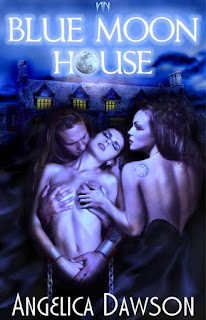 Julia has the chance to become one of the vampires of the Blue Moon House. Before being accepted, however, she must prove herself to each of the vampires, and each has their own exacting cost. Ranging from lesbian, to being forced, to physical torture, she is pushed to her breaking point time and again. Eventually her perseverance pays off and she crosses from submissive to dominant and vampire.

I received a copy of this book from the author in return for an honest review.

This is the first book Angelica wrote in the Blue Moon house series, although her other book Kitten is a prequel. I read Kitten first, then went straight onto BMH.

I have to say, even though I liekd this one very much, I prefered Kitten.

This story again was great, Julia visits Blue Moon House, and as the blurb says, she goes from submissive, to dominant, to vampire. I liked Julias character, and loved how eager she was. I didn't like Will at all. I know it was his role to be as hard and dominant as he was, and you see this during the times of the conversations around the table. You can see he is different when not in his Dominant role, but I still didn't like the way he was with his submissives. He was too hard, too rough, too... well I suppose you'll see when you read it.

But... I loved the story! Again Sophia is a great character, adn  hope to see more of her in the next book!