Welcome to my Blogoversary countdown Giveaway and thank you for joining me in celebrating! 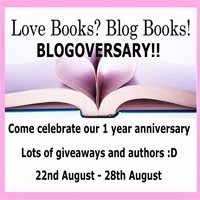 I have Dianna Hardy around today helping me celebrate my blogoversary! If you'd like to eb able to win one of her books, please keep reading!


Can you tell us a little about yourself?
I'm a UK author writing paranormal fantasy for adults, inlcuding paranormal romance and urban fantasies. My books are character-led – I talk through the characters' voices, not just my own. You'll fnd big plots, sex, violence and lovey-dovey moments in my stories, and I am a fan of cliffhangers :p

What is the name of the book you are giving away?
Two books! Releasing The Wolf (Eye Of The Storm #1) – 1 eBook copy and 'Til Death Do Us Part (an adult retelling of The LittleMermaid) – 1 eBook copy

Can you show us the cover and the blurb? 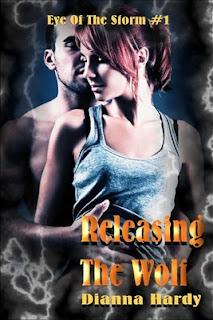 BLURB for Releasing The Wolf:

Lydia Martin has always had dreams, the weirdest and hottest of them all involving a faceless, muscle-bound man that speaks like sin and smells like sex. Like any sane person, she always put the dreams down to an overactive imagination, coupled with a higher than average libido.

Awaking with an irrepressible need to save her fantasy lover, Lydia decides to humour her dream self and head on over to where she thinks he's imprisoned.

What unfolds is beyond even her wildest imaginings, as she's sucked into a dangerous and deadly world she never knew existed ... and it turns out that the man who inhabits her darkest fantasies, isn't the only one that needs releasing. 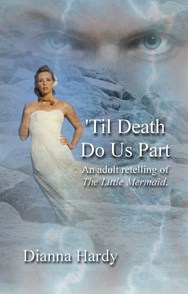 BLURB for 'Til Death Do Us Part:


The day you get married, is supposed to be the happiest day of your life. Dreams are made of such things. But I forgot. I could blame the witch if I wanted to – in fact I did, for quite a while after – but the fault can only lie with me. Being with him made me so happy – so very, very happy – that I chose to forget. I chose amnesia. If I had had any foresight into how my flippant choice would ruin him, I would have saved him the heartbreak. I would have forfeited my knowing him, my own selfishness, lived forever in the pain of unfulfillment, if it meant he could be spared....

When you love someone so much that your heart aches without them in your life, would you give up everything you've ever known to be with them? Would you give up your identity?

This is exactly what Aria did. But her sacrifice comes at a great cost, with startling consequences. With no memory of her previous life, she's forgotten what she really is, and who she's left behind: a jealous, possessive God, who's finally found her, and will stop at nothing to keep her heart from ever straying again.

In this dark and erotically passionate retelling of The Little Mermaid, can a love founded on humanity, stand the passing of time, an angry sea-God, and even death itself?

What made you come up with the idea for this story?
Releasing The Wolf (the Eye Of The Storm series) was a story that I've had in mind to write about for quite a long time. I wanted to write about ‘control’, and that this would come in many forms: sex vs. romance, nature vs. genetics, beast vs. man, love vs. lust, pain vs. pleasure, and so on. It immediately came to me, to make the series about werewolves – I mean, what a conflicted beast the werewolf is. If any creature is going to have control issues, it’s going to be the werewolf!

'Til Death Do Us Part was written on a whim, driven by anger about a situation I couldn't change. It was written in two days and published by the fourth. I pretty much worked for four days non-stop on that book, from cover design to the eBook formatting – it was a therapeuric journey for me.

Thanks for stopping by and helping celebrate Dianna!!

You don't have to follow my blog or anything else like that (but I wouldn't mind if you did), all you have to do to enter the giveaway is post a comment WITH your email address and a winner will be picked at random the day after the Blogoversary finishes (29th August 2013). Posting a comment will automatically enter you into the giveaway. Thank peeps and good luck!!!