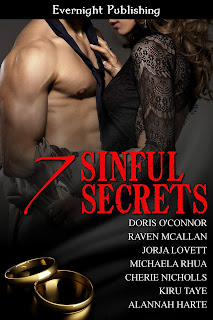 7 Sinful Secrets by The Nuthouse Scribblers


Seven marriages—seven sinful secrets.
Marriages shouldn't have secrets, should they? Follow our seven couples, as they come to terms with the fact that their partner has been holding something back from them. Will it make or break their relationship? Read on to find out, and have your fan at the ready, because these secrets are hot!

The Knickers by Doris O'Connor
Discovering frilly French Knickers in your husband's dry cleaning can only mean one thing, right? They're certainly not Mareijke's! Devastated at this find, she returns home early and walks in on the unmistakable sounds of Stefano in the throes of passion… but things are not what they seem…

Behind The Mask by Raven McAllan
When Daisy went on holiday she did not expect to return with a drop dead gorgeous husband. Life is great until she meets a masked stripper at her belated hen night. She knows the eyes behind that mask, doesn't she?

Domination Dreams by Michaela Rhua
Nicholas Cole has been married to Marissa for twenty years, and he dreams of being dominated by his vanilla wife. When he returns from a business trip, he is in for one heck of a birthday surprise.

Anniversary Gift by Cherie Nicholls
Cleo knows her wife is up to something, and she is determined to find out what it is. When she walks in on Marie and some bloke at a hotel room, she thinks all is lost. And then Marie orders her to stay… And when your Domme gives you an order…

Sex Tape by Kiru Taye
Juan Roberto's unexpected arrival home turns on its head when he discovers his wife Noni has a mind-blowing surprise she's been hiding from him. Discovering secrets and sex tapes have never been hotter or more pleasurable…
Contains: a naughty video and an even naughtier married couple rediscovering each other.

Tassels by Alannah Harte
Harrington loves his new wife Penny. So much so that he puts his own desires for a more exciting sex life to one side. Their lovemaking may be vanilla, but it's all he needs, or so he thinks, until the suitcase breaks and he discovers her secret.
I received a copy of this anthology from one of the authors (Raven McAllan) in return for an honest review. Here is my review of each short story from this book.

THERE COULD BE SPOILERS IN ANY OF MY REVIEWS!!! YOU HAVE BEEN WARNED!!!
The Knickers by Doris O'Connor ★★★★
I really enjoyed this story. When Mareijkes cleaner finds some frilly knickers and Mareijke knows they aren't hers, she's ready to rhumble with Stefano, and find out exactly whats gong on and who these knickers belong to. She gets one hell of a suprise when she finds him in bed with.... her knickers on? Stefanos secret is that he likes the feel of womens underwear, and feels he can't tell his wife this, therefore a dirty little secret is hidden. I liked this story, I liked the fact that Mareijke understood her husbands secret,a nd she actually found it quite sexy!

Behind the Mask by Raven McAllan ★★★★★
Now this one was great! My favourite one of all I think. At first I was like 'woah, she just up; and married the guy?!', but I loved the way this story panned out. Daisys friends hadn't even met her husband yet, but they hads dragged her out on a belated hen night. After  blindfolding ehr and tkaing her somewhere,a  stripper takes stage and dances for her. Daisy thinks she is imagining hunky husband everywhere, and soon realises she is! Alex is thr stripper, and she's the only one who knows this. She gives her friends quite a shock whe she wraps her legs around thie stripper and he takes her to a quiet room! She soon finds his secret is that he owns that club,a nd had to fill in for a stripper at the last minute, and when he found out it was for his wife, he knew he'd have some fun!

Domination Dreams by Michaela Rhua  ★★★★
Nicholas wants to be dominated by his wife, but he finds her so 'vanilla', that he thinks she would never go for it. So when he suprises her with a box of secrets one day, he gets one hell ofa  suprise when he comes home! His wife is in total Dom mode,a nd Nicholas gets his wish. I liked this one, the poor guy kept this secret for so long, and his wife would have totally gone for it anyway!

Anniversary Gift by Cherie Nicholls  ★★★★★
Oh man this one was hot! Cleo is sure Marie is cheating on her when she finds hotel reservations booked by her 'husband'. But once she gets there and catches Marie with a man, shes in for a suprise. Mare is teaching her office assistant to become a Sub, and in Dom mode, she orders Cleo to stay. It turns into quite a night for all 3 of them! I liked this one, I liked Cleos character too. I'd read more about these guys.

Sex Tape by Kiru Taye  ★★★★
At first I wasn't too sure about this one, especially when you find out that the sex tape is actually a secret tape Noni has filmed of her and her husband Juan Roberto. But... then I thought about it. Juan Roberto wasn't upset over the fact she secretly recorded them, he found it a real turn on that she was watching this. He was more happy that she hadn't been filming sex tapes with someone else while he was away! So yeah, I liked this one :)

Tassels by Alannah Harte ★★★
I couldn't get away with one of the characters in this one, Harrington. Even though I enjoyed the story, I just thought the way he reacted when he found the underwear and clothing in his wifes suitcase was a bit OTT.  I can understand someone feeling cheated etc when your other half has been hiding a secret like this, but to shout and demand her put the clothing on and dance for him, even when she asked him not ot make her do this, for me I didn't like that. But, she did anyway, and the atmosphere changed, I'm sure they'll have a happy marriage, just no more secrets!!!

OVERALL!!
I liked this anthology, but then again these guys know how to write don't they :D I gave this 4 stars in total.