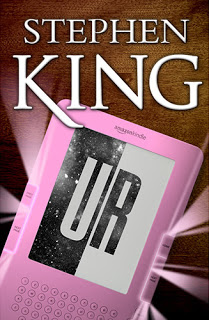 WARNING! THERE COULD BE SPOILERS IN ANY OF MY REVIEWS... YOU HAVE BEEN WARNED!!!!

UR by Stephen King

As quickly as a spider spins its web, King reminds us why he's the master of the novella - a format which, up until now that is, one might have thought is fast disappearing. In his new novella, UR, King is at his unsettling best as he examines the future of the written word - for better or worse. Following a nasty break-up, lovelorn college English instructor Wesley Smith can't seem to get his ex-girlfriend's parting shot out of his head: "Why can't you just read off the computer like the rest of us?" Egged on by her question and piqued by a student's suggestion, Wesley places an order for Amazon.com's Kindle eReader. The [pink?] device that arrives in a box stamped with the smile logo -via one-day delivery that he hadn't requested - unlocks a literary world that even the most avid of book lovers could never imagine. But once the door is open, there are those things that one hopes we'll never read or live through. Firm, gripping, and deftly written by a craftsman at the top of his game, this is King at his crisp, clear, page-turning best.

I read this book over a couple of days. It's a nice short story from Stephen King, and again it has spurred me on to read more of his work. I have so far read only a few of Mr Kings novels, those being The Green Mile (my favourite book ever!), Hearts in Atlantis (my first Stephen King book read), and In The Tall Grass (another short).

I was happy to see things in this book that were linked to his other books, such as the references to The Tower, references to JFK's assassinations (which is what 11.22.63 is about), and my favourite reference.... the low men in yellow coats (which is from Hearts in Atlantis) :)

The story in Ur was quite addictive, I found myself this morning reading the last 60% of the book as I was really intrigues as to where this was all going. The pink Kindle... that didn't come from Amazon... that lets you buy books that aren't from Amazon, but some other alternate universe where authors didn't pass away for years after they really did, and they wrote more novels! Sounds like a good one! But... it can tell the future too?!?! Yeah, I'm glad my Kindle is black :)

Wes orders a kindle but receives this pink one instead, and find the Ur program on there, which lets you download books from another universe. He finds plenty of books from authors that passed away, but in this alternate universe they lived a few more years, and wrote more novels.

It was kinda cool to think of things like this happening, but when it got the the UR LOCAL program which let you read news headlines from the future, it got a bit freaky!

If you haven't read any King before, this one is cheap and short on the kindle (haha), so yeah I'd recommend you read it. And I'm sure all the King fans out there will enjoy it too!